ExpressVPN is one of the lightning-fast VPN apps available for the Amazon Fire Stick to protect your privacy and security whenever you use the internet. With the ExpressVPN on Firestick, you can browse the web anonymously and securely. It lets you stream anything you want including the geo-restricted contents without any limits. Find more about the ExpressVPN, its features, and the steps to install ExpressVPN for Firestick in detail from this article.

ExpressVPN is a high speed, ultra-secure virtual private network that works as the best-in-class. It is basically a proxy service to protect your online privacy and security. With the help of this VPN app, you can easily access anything without restrictions. You can use ExpressVPN on Firestick or Fire TV to unblock the websites and apps. With the huge network of VPN servers available in different countries, you will get unlimited bandwidth with no throttling issues with the ExpressVPN app.

It is an easy-to-use VPN service that can be downloaded and installed with a push of a button. With this, you can easily set up the ExpressVPN on your Firestick in minutes. You can quickly stream, download, and access anything from anywhere with the help of the ExpressVPN app. It will efficiently protect you from being hacked or tracked by the online snoopers with the powerful encryption technique. With live chat support, you will get instant help using the ExpressVPN.

Features of ExpressVPN for Firestick

Steps to Install ExpressVPN for Firestick Via Amazon App Store

Step 1: You have to turn on the Amazon Fire Stick and hover to the Search tab.

Step 2: Click on the search tab and type as ExpressVPN. Tap the OK button on the Firestick remote to choose ExpressVPN from the suggestions given below.

Step 4: On the next screen, you have to click on the Get button to start the downloading process of the ExpressVPN.

Step 5: Click on the Open button when the ExpressVPN completed its downloading process on Firestick.

Step 6: Now, ExpressVPN will open up and you have to login or sign up to use it on the Firestick or Fire TV.

Related: How to Install IPVanish on Firestick / Fire TV

Steps to Setup ExpressVPN on Firestick

When you have downloaded the ExpressVPN app, then you have to set up the VPN to access its features. Get to know the steps to setup ExpressVPN on Firestick from below.

Step 1: You must first register with ExpressVPN account using your email id. If you already have an account, then simply login to it.

Step 2: Click on the OK button to accept the connection request with ExpressVPN.

Step 3: Now choose a location and connect with the ExpressVPN server from your Firestick device.

Step 4: With this, your IP address will be hidden and you can unblock the geo-restricted websites and apps.

The VPN apps cannot be accessed on the first generation Firestick device. It will let you connect to the VPN server but you will loose the internet connection. To get rid of this issue, you can follow the steps given below.

Related: How To Install Kodi on Amazon Fire Stick? With 4 Easy Methods

ExpressVPN has become the most essential tool for the Amazon Fire Stick as it provides ultimate security. It will let you stream contents by unlocking the websites and apps. So you will never have to miss anything while using the web when you have ExpressVPN for Firestick. As it is the fastest VPN, you can have a try and do share with your experience in the comments. 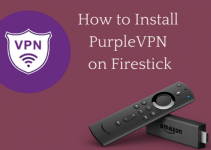