Home
Apps
Mavtv on Firestick [2022] – How to Watch Without Cable

MAVTV is a television channel that covers events and shows from the automobile field. It has events forms Motorsports, Automotive Reality, and MMA. In addition to that, it has Live Events from ARCA, Pro Motocross Championship, Lucas Oil Chili Bowl Nationals, Show-Me 100, and many more events. You don’t have to pay any subscription fee and can access the channel by using your cable TV credentials. Follow the steps to know how to watch MAVTV on Firestick or Fire TV.

The features of the MAVTV are as follows,

How to Watch MAVTV on Amazon Firestick

MAVTV has no standalone app on any app store. You need to access the platform only through its website.

Step1: Open the Silk Browser on your Firestick.

Step2: Go to the URL www.mavtv.com.

Step3: On the homepage of the channel, click the Get MAVTV button on the top of the screen.

Step4: Enter your Zip code and your TV Service Provider on the next screen.

Step 6: After the successful sign-in, get to stream all the motorsports events.

MAVTV content can only be watched on the website, and there is no other way to do it. But, some of the MAVTV content is available on other streaming platforms. Let us discuss them in this article.

Being the owner of MAVTV, Lucas Oil Racing TV has some of the MAVTV contents. The standalone app is available on the Amazon App Store, and the subscription costs $6.99 per month, which includes selected live events, and $99.99 per year, which includes all the live events.

TikiLive has 100+ live TV channels that include MAVTV. It can be downloaded officially from the Amazon App Store. Moreover, you can access all the MAVTV content in full HD quality. It is available in their types of subscription starting at $99/ month.

Hulu+ live TV is one of the most popular streaming services that are available in the Amazon App Store. It offers live TV channels, thousands of movies, shows, series, originals, and more in HD quality. Along with that, it also has MAVTV content. Its monthly subscription starts at $6.99.

Step1: Turn on the Firestick and tap the Search icon on the Home screen.

Step5: When the app is downloaded, click the Open icon to launch the app.

Since the MAVTV app is not available, accessing it by the website is the only choice. MAVTV contents are the best in the field of Automobiles. It covers almost all automotive events in the world.

Can you stream MAVTV on Firestick outside the United States?

You can stream MAVTV anywhere in the world using the best VPN on Firestick.

Is MAVTV on Amazon Prime?

No, MAVTV is not available on Prime Video.

What channel is MAVTV on DirecTV?

MAVTV is streaming on channel no. 212 on DirecTV.

Is live streaming on MAVTV for free?

Yes, you can stream MAVTV content on Firestick for free. 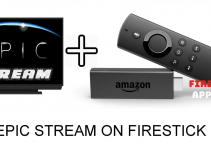