Home
Chromecast
firestick vs Roku vs chromecast: WHICH IS THE BEST STREAMING DEVICE? 2021

Amazon launched Firestick/ Fire TV Stick in the year 2014. It runs on Fire OS which is an Android-based OS. On the course of time, Amazon has launched various upgraded versions of Fire TV. As of now, there are a lot of 8 versions of Firestick. Firestick is one of the contenders for the best streaming devices race.

Let us dive into the comparison.

Firestick VS Roku VS Chromecast: Setup

In Roku, the setup procedures are almost similar to Firestick. The external wire connection, on-screen instructions are pretty much the same. But, you have to create your Roku account manually. There is no way that the account is automatically synced up. The external wire connection will vary according to the devices, but the on-screen instruction will almost remain the same.

Google Chromecast has an entirely different setup process. Except for external wire connection, all the on-screen instructions will be followed on your smartphone app. For the setup process, you have to install the Google Home app from the Play Store or Apple Store.

In the setup process, Firestick is the winner. Having separate wire connections and separate app caused the downfall of Roku and Chromecast.

Roku VS Firestick VS Chromecast: Design

Amazon has two different designs available right now. One is the small rectangular shaped device, more like a USB flash drive. And the other one is the big cuboid-shaped device. In the rectangular device, only two ports are available. One is the HDMI port and the other one id the micro USB port. Firestick maybe a little thicker. When you connect it to the TV, it may block the nearby ports as well. For this, you can use extension cables.

Like the version, the design also has many shapes in Roku. But the most used Roku device is more like Firestick. A small thumb drive shaped device. There is not a thing to separate Firestick and Roku in the design category.

In the Design section, Chromecast is the real winner.

Chromecast VS Firestick VS Roku: Control

For Firestick, you will get a dedicated Firestick Remote. Recently launched devices like Firestick will have voice support too. The remote is the standard rectangular shaped tool. Other than the remote, you can control the remote with the smartphone app called Amazon Fire TV. The app is available for both Android and iOS.

In Roku streaming devices, it has the same standard rectangular-shaped tool. The highlighting feature in the remote is that it has pre-set buttons. The last four buttons on the remote are named Netflix, Amazon Prime Videos, Hulu, Sling. Pressing this button will open the respective app. Like Firestick, it also has the smartphone app to control the device.

On Control-wise, Firestick is easier to control with the voice search.

The UI of the device is not compelling, but it is more than enough for a streaming device. The white and brown colour code with the black background shows the apps and icons clearly without any blind spots. The itching thing about the device is the on-screen keyboard. You need to navigate to every letter, which makes it annoying. But in the Firestick 4K model, you can use voice search.

Roku has a completely different UI when compared to Firestick. With white and grey colour code with the blue & black gradient background, it looks good. But there are some blind spots. Like Firestick, the on-screen keyboard is the main head-ache and there no voice search too. So, you need to bear that.

For Chromecast, you won’t have any UI at all. You just click the Cast icon and the content appear on your TV. When you disconnect, the TV screen goes back to normal.

In the UI category, Firestick is the winner.

Roku also has its own app store, Roku Channel Store. It has all the popular apps, channels, and games. But you can’t install any apps and games using any third-party source. Having a dedicated OS is the main reason for this.

In Chromecast, you can’t practically install apps and games. But you can mirror or cast all the apps and games on your smartphone to the TV.

In the apps section too, Amazon Firestick is the winner.

Roku VS Chromecast VS Firestick: Price 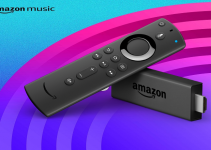