Home
Apps
How to Download & Install WWE Network on Firestick [2021]

WWE (World Wrestling Environment) is one of the most-watched sports in the world. The app was launched for Firestick and has a recent version of 4.38.29. The olden days are gone when you need to wait for a specific time to see WWE on your TV. If you have the WWE app on your Firestick, you can stream the WWE anytime you want. Follow the below steps to install the WWE Network on Firestick.

What is WWE Network?

WWE Network is a popular streaming platform that can be used to stream WWE videos. It is a subscription-based service. On the app, you can access thousands of on-demand videos, original series, documentaries, and shows. By installing WWE Network on Firestick, you can stream WrestleMania, RAW, SmackDown, NXT, and other premier shows.

Related: How to install Yahoo Sports on Firestick

The features of the WWE Network are mentioned below.

Steps to Download and Install WWE Network on Firestick

Since the app is officially available on the Amazon App Store, you can directly install the app. You don’t need to use any of the third-party downloaders.

Step 1: Turn on the Firestick and click the Search icon on the Home screen.

Step 2: Using the on-screen keyboard, type WWE and search for it.

Step 3: Choose the WWE app on the searched results.

Step 4: On the next screen, click the WWE app.

Step 6: When the download is complete, click the Open button to launch the app on your Firestick.

Related: How to install Fox Sports on Firestick

In this alternative method, you need to have a PC with an internet connection.

Step 1: Open any of the web browsers and head to amazon.com.

Step 3: After the successful sign in, go to the Search bar and search for the WWE app.

Step 4: Choose the WWE Network app on the searched result.

Step 5: On the next screen, click the Get App button.

Step 6: Your Firestick device will appear. Tap on it.

Step 7: Wait for a while, the app will be downloaded on your Firestick. Now, the app is available on the Firestick Apps & Games list.

Related: How to install NBC Sports on Firestick

Use any one of the methods to install WWE Network on Firestick and get to stream all the WWE contests. Even though the app is available for free, you need to pay the subscription fee to stream the WWE contents. If you have any doubts about the downloading process, tell us in the comments section. 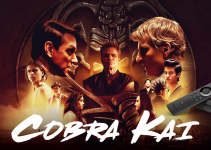