Home
Firestick
How to Watch NCAA March Madness on Firestick

NCAA March Madness is an American single-elimination Basket Ball tournament that is being conducted once a year consisting of 68 college Basketball teams across the United States. And during these matches, a pool contest is also being held for the fans by top TV companies like ESPN and Fox sports where the fans can participate for free in the contest and could win thousands of dollars. You can watch NCAA March Madness on Smartphones, tablets, iPhones, and Firestick.

The upcoming tournament is being held in 2022, the 68 teams are divided into four divisions, and are only if they win they will be forwarded to the next level of the tournament. If you lose a single match, then you’re out of the tournament. And in the final stage, the final four teams will compete for the champions cup.

How to Install NCAA March Madness on Firestick

In Firestick, you can install the NCAA March Madness app with any one of the below methods.

Step 1: Switch on the Firestick device.

Step 3: Click the Search button as shown in the image below.

Step 5: Press the OK button to start searching for the app.

Step 7: Tap Get button in the next screen to download and install the app.

Step 8: Then click Open button to launch the app.

Firestick has an exclusive feature for installing apps, that is you can ask Amazon to install an app automatically on Firestick and it will perform all the steps for you. Learn how to do this by following the below steps.

Step 1: Open any browser and go to the Amazon app store website.

Step 4: In the right corner, select your Firestick device in the dropdown.

Step 6: Now turn on the Firestick device and connect to a Wi-Fi network.

Step 8: Go to Library and launch the app and start streaming shows and events.

Related: How to Install and Watch GSE Smart IPTV on Firestick

Concluding that the above article helps you on how to install and watch NCAA March Madness on your Firestick TV. It is a yearly once event and so you can install this app and watch all the matches and after the tournament ends, you can uninstall it to save space on your Firestick device. 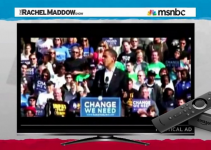