Home
Firestick
How to Watch Seinfeld on Firestick / Fire TV

Seinfield is a popular TV series that aired on NBC from 1989 to 1998. This series is the most influential sitcom series because it broke through all records became the #1 sitcom series in the 90s. The storyline of the Seinflied has adapted from the real-life experience of this series writers Larry David and Jerry Seinfeld, where the latter is the lead cast. To know more information on Seinfeld and watch it on Firestick, you can read below.

The plot of Seinfeld explores the personal life of Seinfeld with three of his friends. Also, there are 9 seasons and 180 episodes in the Seinfeld series. Even though there are a lot of available platforms to watch the Seinfeld series, you can choose Netflix since it is a global platform. Note that you need a subscription to access the Netflix platform. Soo, you can subscribe to Netflix through its official website, and the subscription starts from $9.99 per month.

Related – How to watch House of Cards on Firestick

How to Watch Netflix on Firestick

1. Enter into the home screen on your Firestick after you set it up.

2. Then, click on the Find tab from the home screen.

3. Choose the Search tile below the Find tab.

4. Type and search for the Netflix app.

5. Pick the Netflix app below the Apps & Games categories.

7. Then, select the Open button to launch the Netflix app.

Other Platforms to Watch Seinfeld on Firestick

You can find other platforms to watch the Seinfeld series in the section below.

You can install and sign up for free on Vudu. But to watch movies you have to buy or rent movies or TV shows of your choice. And with the Vudu app available on Firestick, you can rent or buy the Seinfeld TV series to watch on your Firestick.

Related – How to Watch Squid Game on Firestick 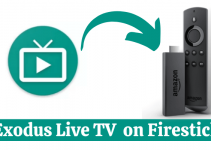